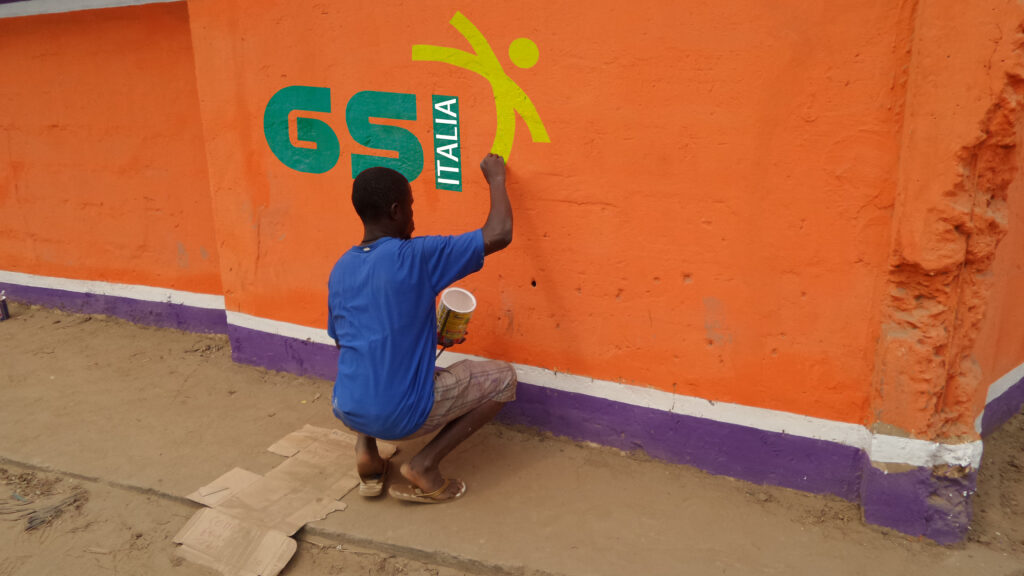 An orange perimeter wall and the patient work of the boy who paints the acronym of our association in a Congolese land that has become an advanced front for GSI Italia of its commitment to solidarity in the world.

A serious and qualified commitment that is recognized by public and private donors, as well as by institutions and officials, occasional visitors to our projects.

This is the case of Madame De Brito Procopio Cinzia who, on a mission to Kinshasa for the World Health Organization, based in Geneva, visited the Center created by GSI Italia for street girls in Kinshasa in 2019 and was impressed for the work done and for the guests, towards whom the lady felt spontaneous empathy, to the point of deciding to dedicate part of her time to them, as a simple volunteer.

So she decides to take three months of leave from the Organization for which she has been working for 27 years and to “get his hands dirty”, concretely, in a daily life of the need for a fragile and marginal population like the small girls of the streets of the Congolese capital. Scraps of an African humanity which is another scrap in a consumer society plagued by a health pandemic which is also moral and infected by indifference.

From September to Christmas Madame De Brito Procopio will thus be in Kinshasa, a guest of GSI Italia, available to our association for an experience from below and to experience the effort of being voluntary, in the trenches.

Democratic Republic of Congo, gsi italia, street children of Kinshasa, Volunteering
Previous Post
THE CORONAVIRUS CONFIRMS AND DOES NOT STOP THE SOLIDARITY OF GSI ITALIA VOLUNTEERS
Next Post
THE WATER PROJECT’S PROGRESS CONTINUES IN CONGO